In 2006, Seattle Police Detective Denise “Cookie” Bouldin started a chess club for Rainier Beach youth. The game served well as a metaphor for life’s important decisions. Since then, Detective Cookie’s chess club has provided a safe haven and created an opportunity for neighbors of all ages to interact and build community. 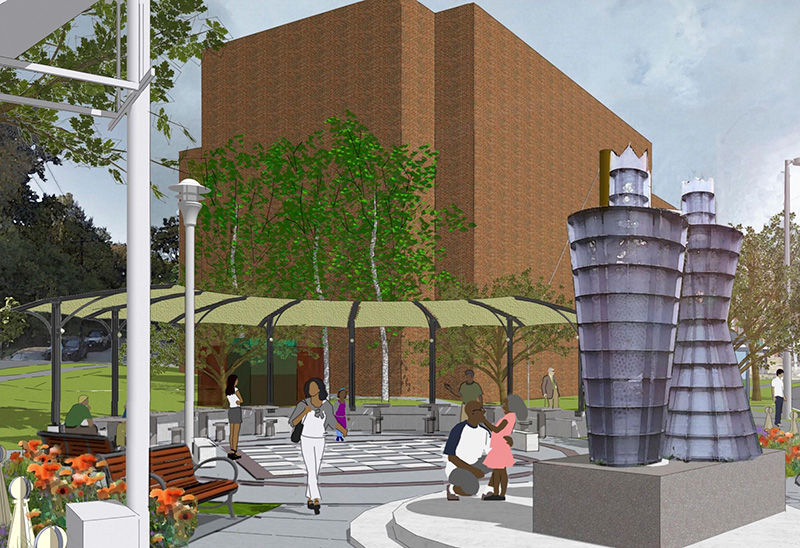 To honor Det. Cookie and to carry forth the positive momentum of her work, a group of community leaders and volunteers formed the Friends of Det. Cookie Chess Park (FDCCP) and began work on a permanent chess park and community gathering space.

Our vision is to create a small public park where chess can be played on built-in chess tables and on a giant in-ground chess board. This park is meant to be an outdoor destination for her club as well as the greater community to learn, play and observe chess together in Rainier Beach, Seattle, WA. Our mission is to improve the health and wellbeing of children and families in Rainier Beach through the game of chess.

We have been working with Johnson Sutherland, a landscape architecture firm, to design and permit our vision.

The Detective Cookie Chess Park is envisioned to be an intergenerational, multicultural community space where neighbors can gather and play chess. Currently, the site is an underused right-of-way adjacent to Barton Place Apartments, low-income housing owned by Seattle Housing Authority. A mere block away from the main business corridor which includes our public library, community center and pool, and K-8 and High Schools, the site is at the heart of the Rainier Beach neighborhood. We are igniting the potential of this underused space to develop a beloved community asset.

According to the Seattle 2035 Comprehensive Plan, Rainier Beach has the highest risk of displacement and lowest access to opportunity of any neighborhood in the City. We also carry the perception of a high-crime neighborhood. This has especially taken its toll on our young people–who have suffered the loss of two teens to gun violence in just the last year. However, Det. Cookie’s Chess Club has been making a difference.

A permanent chess park would improve the health and safety of our neighborhood by providing free access to a game that teaches how to concentrate, how to win and lose gracefully, how to think logically and efficiently, and how to make tough decisions. The park will be a gathering place for Seattle’s most diverse neighborhood to build community and in increase quality of life.

In 2015 the corner of Barton Pl. S and Rainier Ave S., owned by SDOT (Seattle Department of Transportation), was identified as a highly visible connection point in Rainier Beach, where several crosswalks convene and Rainier Ave takes a ninety-degree turn. The City and the community decided it would be beneficial to activate this corner with public art. The community involvement mostly consisted of members of the Rainier Beach Merchants Assoc., and they would later form the Friends of Det. Cookie Chess Park (FDCCP). After about one year of extensive community and interdepartmental feedback and a rigorous design process, in June 2016, ten-foot high sculptures were installed and were named the “King and Queen of Rainier Beach”, resembling chess pieces.

How Does She Do It? Article about Detective Cookie

See what we’ve been up to

Detective Cookie with the t-shirt drawing contest winner Annabelle who is behind the design of our new logo! Always involving youth is key to having a great community. #detectivecookiechesspark #detectivecookie #chess #chessclub #chesspark #rainerbeach #communityevent #community #positivevibes

Watch our short video that describes our vision, inspired by Detective Cookie, to create a small public park in Rainier Beach, Seattle, where chess can be played outdoors on built-in chess tables and on a giant in-ground chess board.